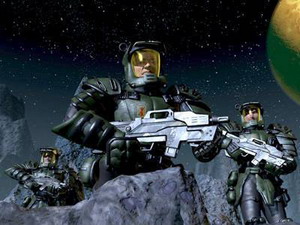 Roughnecks: Starship Troopers Chronicles was an animated CGI series based on Starship Troopers, a novel by Robert A. Heinlein that had long-lasting impact on the development of Science Fiction and chronicled Earth's war against the Bugs, an insectoid alien species. The series combined elements of both the original novel and the movie adaptation to create a hybrid series that retained the action/adventure story of the movie, but with additional characterization and personal relationships. The series followed the exploits of "Razak's Roughnecks" throughout an ever-expanding Bug War.

The series ran into horrible behind-the-scenes production problems including hiring four different animation teams — Foundation Imaging, Flat Earth Productions, Hyper Image and Rainbow Studios — to work on the episodes, and was never properly finished. Forty episodes were ordered and thirty-six were produced, leaving the conclusion of the final story arc unresolved. To fill the original order, four clip-shows were created from earlier episodes, one of which also included plot-relevant new footage. The series is divided into eight campaigns, each composed of five episodes which follow the Roughnecks through the numerous battles of an individual combat theatre. Each campaign contains an individual storyline within the larger context of the Bug War, to create one single over-arching plot.

To see the rest of the media, see Starship Troopers.