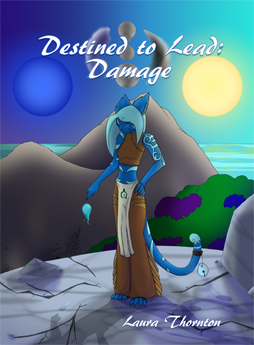 Destined to Lead is a book series by Canadian author Laura Thornton.

All the characters are Cat Folk. Also, due to the multicoloured nature of the feas, coming in every single colour imaginable, times two, the main characters are Color-Coded for Your Convenience. Although things can get a little confusing with Kajiya and her brother Resurge- they're both blue.

The story revolves around Kajiya, the first female fea to be marked as a magik, the next leader of her Tribe Mirabilia. She Jumped at the Call and fell flat on her face. She managed not only to put her best friend and one of Mirabilia's best hunters, Gaorun in danger, but her overreaction at the high council's punishment, (revoking her right to lead) causes her to be banished from Mirabilia! She then gathers up her team and sets off to regain her honor. Too bad the Big Bad decides Kajiya would be better off dead. They struggle to get supplies when the Assembly takes control of the only nearby source of water, and Kajiya’s magic suddenly gives out. Finally they manage to travel over the mountains and reach the far side of the continent. They manage to construct a boat, and leave with seconds to spare. But they soon find themselves at the mercy of the current, and strain themselves trying to reach the island of Ainee. Just as they spot the warriors, they reach the island, and safety. The next day, they set out to explore the island. It doesn’t take them long to find the original reason why Kajiya chose the island as their destination- it is the resting place of the blakeslee, giant stone golems created by magic during the great wars. Kajiya, however holds the Idiot Ball for a moment when she knocks one on the head to see if it’ll wake up. Bad idea. And then the author decides to be mean and gives us a Cliffhanger ending. Book 2, Healing begins exactly where Damage left off.

Was originally penned during NaNoWriMo 2012, it won. The author has stated that she intended (and succeeded in) finishing each book of the series by November 30th in honour of it. Likewise, she has published each book on May 28th as well.

There are confirmed to be three books in the series, Damage, Healing and Redemption.

Fun fact: the author does her own cover art. Hence, Kajiya thinks Sleeves Are for Wimps due to Rule of Cool. Slightly justified as concepts for the second book reveal that Kajiya would rather come face to face with a taic than wear sleeves. She hates to have to cover her magik's mark. Bare Your Midriff is also slightly justified- Mysterium has two suns.