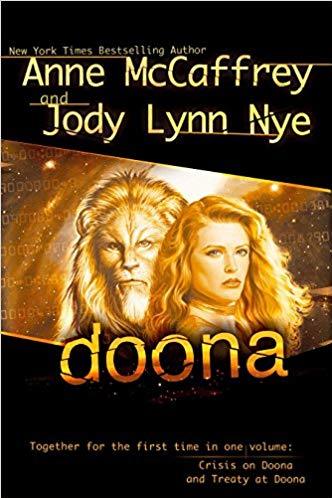 Doona is a trilogy of three books written by Anne McCaffrey, writer of the Dragonriders of Pern series.

In the future, Earth is a heavily overpopulated planet with less than 12 square miles of undeveloped land - most people have never actually seen a real plant, or had real meat. People have to marry at the age of sixteen in hopes of having the two allowed children they could have by the age of thirty, providing that they pass the screening process and have no genetic issues.

Finally, after years of lobbying, the decision to colonized a pastoral jewel, called Doona, has been passed. The colonists are pleased, and after surviving a hard winter, eagerly await the arrival of their families. However, complications arise when a simple walk into the nearby forest uncovers an unsettling revelation - the colonists from Earth are not alone.

The cat-like race known as the Hrrubans, hailing from a similar situation back on their homeworld, have also colonized the planet, calling it Rrala. Initially pretending to be primitive natives, it is eventually revealed that they are as native as the humans themselves.

Soon, a deal is stuck, and the planet is used as an experiment to see if the two races can get along in the long run.

The series comprises of:

The books feature the following tropes: