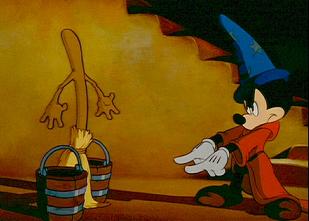 And when you're done with the basement you can clean the upstairs bathroom.
Advertisement:

In many works, magic is something to blast things with and generally make stuff explode.

But not in this universe. In this universe, Mundane Utility isn't a secondary effect of all those awesome spells, but the primary one. The magic essentially has to do with things on the more mundane scale of the Inverse Law of Utility and Lethality, like Cleaning Magic, or Gardening Magic, or Paper-Filing Magic. Why modify that fireball spell to cook your hotdog, when you can just have a spell that does exactly that in the first place, and to your perfect specifications?

This can get as crazy as worlds where everything is done with a spell, from cooking to transportation to brushing your teeth. Another manifestation of this trope is where everyday things or tasks seem to be imbued with magic. It might be so subtly done that it leaves one wondering Maybe Magic, Maybe Mundane, especially in a Low Fantasy or Magic Realism work. Either way, this kind of magic is somewhat prone to the What Kind of Lame Power Is Heart, Anyway? question, especially in works where the more ordinary (less ordinary?) way we view magic is also used. It happens pretty often though that this kind of magic can turn out to be Lethal Harmless Powers, when the user is pushed into a corner, implying that Heart Is an Awesome Power. If the ability is a personal power rather than a general spell the user might be recruited to the Hero's group for some particular task, or the character will improvise the uses of their power to match the situation using cleverness.

It should be noted that in worlds where there is some kind of Equivalent Exchange for performing magic, this kind of power appears much less often because the mundane nature of it can be performed without magic, and often times a mage, witch, or wizard would rather just wash those dishes by hand than pay out the cost, whatever it might be.

Compare Mundane Utility and Martial Arts and Crafts, for the martial arts version. If the magic is incorporated into or used in conjunction with some kind of mechanical aspect, it might be Magitek.