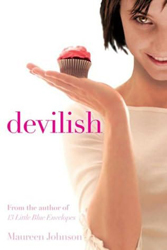 This was my final move in the game, this graceless thud to the floor. There was only one question left in my mind... Had I played it right?

(no, not THAT Maureen Johnson). It tells the story of Jane Jarvis and her best friend Allison Concord, high school seniors in Rhode Island who find things becoming complicated when Ally admits she unwittingly made a Deal with the Devil. It gets harder for Jane to disbelieve this insane story as the world goes insane around her, and before she knows it, she's in a decisive battle for eternal souls.

No relation to the Sega Genesis game Bad Omen, released in the USA with the name Devilish.