Our Demons Are Different 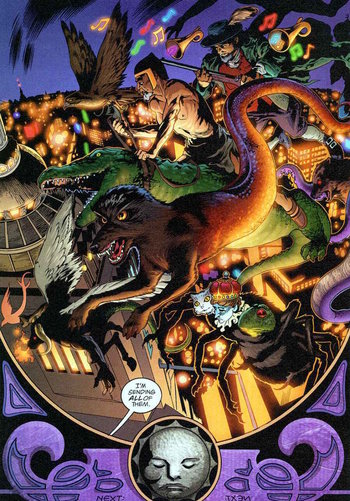 Chase them away!
Chase them away!
I'm afraid!
Need your aid!
PINK ELEPHANTS ON PARADE!
"We are called demons precisely because we do bad things."
— Tablet, Graffiti Kingdom
Advertisement:

Demons. Devils. Fiends. They're all over the place in storyland, but no two authors portray them in exactly the same way.

Demons in western fiction tend, by default, to be of a vaguely Abrahamic nature, most often red or black with horns, hooves, and maybe a tail. They're generally found torturing the souls of those that wind up in Hell, making deals with mortals in order to claim their souls for the pit, and are usually on the side of Evil, often opposing Angels.

Demonic names are quite a bit looser than those for Angels, though in the west, they often take inspiration from Hebrew, biblical or mythological sources, as well as the Ars Goetia.

The prospective demon has many options available for customization:

There's no doubt about it. No matter what you choose, Your Demons Are Different.

Series which have protagonists up to Demon Slaying especially rely on this trope, as the various ways a demon can be different can often determine how a demon hunter actually operates.