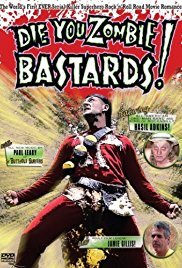 Die You Zombie Bastards! is a 2005 American Sci-Fi Horror comedy Superhero film. It concerns a Serial Killer who takes up heroism to rescue his wife from a Supervillain who's trying to make a zombie army to Take Over the World.