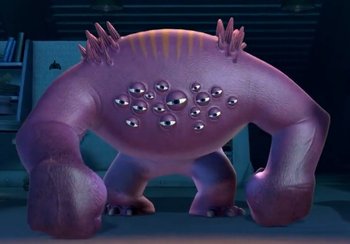 "You can't imagine what I pay for contacts."
At the same time, the thrones are big many-eyed orb-like things. That have flashy lights. So God rides a chariot made entirely out of multi-eyed flashing orb creatures that are actually angels. I can't help but feel that God would totally win a low-rider contest.
— The Book of Ratings

Most people only have two eyes. This is generally considered a good thing — it's part of bilateral symmetry, those elements of nature that make sure you only have two arms and two legs. However, if somebody has three or more eyes, well... you want to avoid those people. Sometimes they're harmless but freaky, other times they're actively evil, and occasionally they represent spiritual enlightenment. Sometimes opening a "third eye" shows a level of Psychic Powers, but sometimes a creature will have many eyes so it can freak you the fuck out.

Having some Extra Eyes can become Nightmare Fuel if done right or Nightmare Retardant if done with Special Effects Failure (although if done wrong, it can still be freaky).

Contrast Eyeless Face, where it's the lack of eyes that's freaky, or Cyclops, for a creature with a single eye. A Sister Trope to Eyes Do Not Belong There, as the extra eyes have to go somewhere, and not always the usual places. Supertrope to Third Eye. Also compare and contrast Extra Digits, which is a subtle and not immediately noticeable physical anomaly.