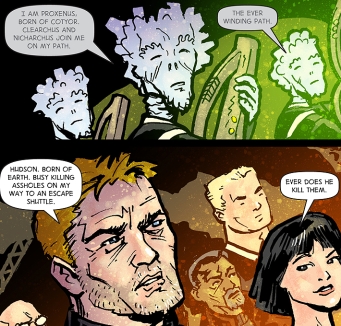 Ever does he kill them.
Advertisement:

is a webcomic about a small group of human prisoners in the Eye - a prison in a hollowed out asteroid run by the Tha'Latta, a species that views any infraction as proof of inherent defectiveness. Located in a backwater system, the Eye is far from human influence and houses a small group of human prisoners. When the prison is thrust into chaos, the humans attempt to escape, confronted by a variety of other species let loose and hostile to humanity.

The comic concluded after six issues and a total of 124 pages.