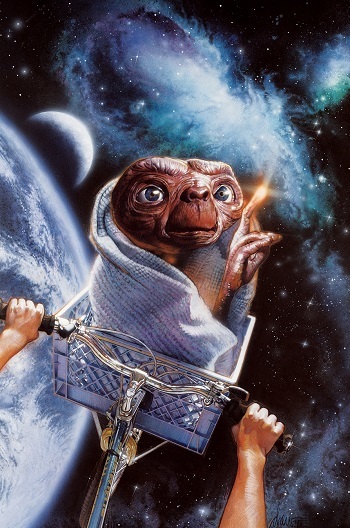 "A journey beyond the stars. An adventure beyond belief."
"Fly! Hoooommee!"
—E.T.
Advertisement:

E.T. Adventure is a suspended dark ride that can be found at Universal Studios Florida, with it formerly existing at the Universal Studios parks in Hollywood and Japan. Following the events of the film, the attraction has E.T. once again being trapped on Earth, and this time enlisting the guests' help in returning him back to his planet.

The attraction begins with Steven Spielberg appearing as himself over a television monitor, explaining to guests the entirety of the situation. He explains that E.T.'s homeworld, the Green Planet, is dying of an unknown sickness and that E.T. is the only one that can stop its destruction with his healing touch; mentioning specifically that E.T.'s friends, Tikli, Orbidon and Magdol need to be healed in order to save the planet and that the guests will ride in bicycles with E.T. in order to bring him home. On top of all that, he also brings up that before the guests leave with E.T., they'll need "Interplanetary Passports". note Which is just a way of hiding how E.T. says the names of the guests at the end of the ride.

From there, guests find themselves in the middle of the forest as seen in the film; where at times E.T.'s mentor, Botanicus, will send down a message warning of the planet's destruction and desperately asking for E.T. to return. Guests then board the "bicycles" to embark on the journey to Green Planet, where they are at first faced against the police and NASA, who are once again out to capture E.T. for research. This leads to E.T., as in the film, making the bicycles "fly" in order to evade the authorities. After soaring high above the city, the guests are then taken into hyperspace towards the Green Planet.

When the attraction first opened, its storyline was originally that the guests were the "actors" in an E.T. sequel that Steven Spielberg was filming and the "Interplanetary Passports" were instead called "Backstage Passes"; but this would later be changed into what it is today in order to make the experience feel more "real".