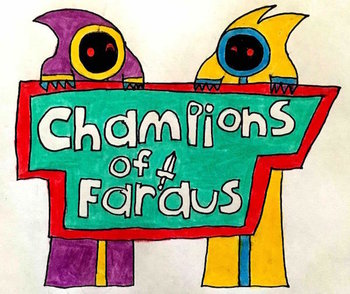 Leilusa (left) and Hyperion (right) are holding the series title for you.
"In the magical world of Far'aus,many different people of many different races worship many different deities,but levels of competence differ from person to person-gods and goddesses included!"
Advertisement:

is a comedic fantasy action adventure Webcomic that follows the adventures of the Hyperia pantheon,lead by Leilusa, a goddess of shadow, and Hyperion,a God of light.The story primarily follows their handful of followers,which include Daryl Mason,a budding fighter and Champion of Leilusa, Skye Glorious, Champion of Hyperion and person who needs to watch her temper,and others who join them as the story goes along. Their most frequently fought adversaries are members of Sarengal's cult, who cause a lot of the problems for Daryl&co. either directly, or indirectly.

The story is told in a semi-continuous fashion, with chapters of 60 pages on average that, for the most part, have self contained story arcs. Each chapter is referred to by a number, and a titleExample  story/chapter #[number of chapter], [name of chapter].

has additional information that expands upon and explains things seen in Champions of Far'aus.