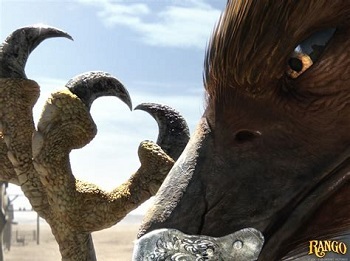 This is one bird no one wants to mess with.
Advertisement:

The powerful and intimidating appearance of birds of prey has earned them the fear and respect of people worldwide. Whether a character in their own right or a symbol of the strength of another, raptors are an intimidating prospect.

One reason why birds of prey are made antagonistic is because of their large size and strength (as well as their rather intimidating appearance) since many are incredibly powerful predators, capable of taking down much larger animals. The fixed raptor glare is also rather off-putting.

This trope does not just apply to actual birds of prey, but to humans and other creatures that use bird of prey symbolism; associating a villain with a bird of prey can symbolise his predatory nature and/or relentlessness.

A bird of prey can also symbolise an aristocratic villain or Anti-Hero — either through the real-world example of heraldry or having a bird of prey as a Right-Hand Attack Dog. This symbolism is because of the sport of falconry, which was historically practiced only by royals and nobles.

Generally, this trope applies to falcons, hawks, and, more rarely, eagles. Whilst owls and vultures are also birds of prey, they have very different connotations in fiction. Only add examples pertaining to them here if they fit the trope description.

Compare and contrast Noble Bird of Prey, which features birds of prey as noble, proud, and majestic. A subtrope of Feathered Fiend and Predators Are Mean. For the nocturnal equivalent, see Ominous Owl. For the scavenging equivalent, see Vile Vulture.

Instead of hunting or doing tricks, Dale's new falcon would rather just maul Bill.

Instead of hunting or doing tricks, Dale's new falcon would rather just maul Bill.