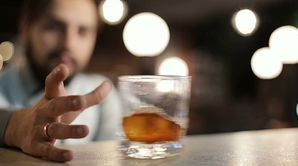 Whoosh!
Gimme a drink, bartender!
—The Man With No Name, The Town with No Name
Advertisement:

The bartender slides the cup, mug or shot glass across the bar to a patron. Sometimes, the patron may fail to catch it and it falls off the bar, revealing that he has never visited a bar before.

A common trope in Westerns.

Bar Slide as a method of delivering drinks (or similar items)

Well, that didn't work as intended.

Well, that didn't work as intended.