Harping on About Harpies 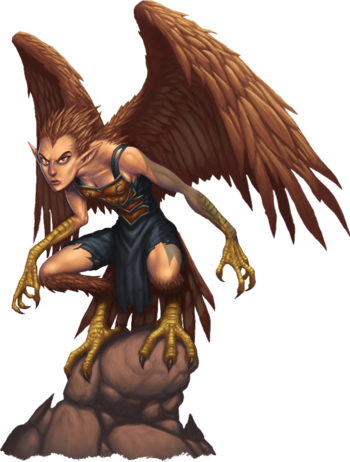 "Grimmer than these scarce any prodigy, nor any plague e'er rose at the wrath of the gods from the Stygian waves: a winged thing with maiden’s face, belly o'erflowing and most foul, a hooked hand, and face hunger-pale forever."
— Virgil, The Aeneid, Book III, ll. 253-257.
Advertisement:

Like centaurs, mermaids, Fauns and Satyrs, harpies are mythical creatures that take the form of part-human, part-animal creatures — in this case, one half is a woman and the other half is a bird, usually a bird of prey. They originated in Greek Mythology, where they often took the job of punishing mortals for their misdeeds. This punishment frequently took the form of snatching away or befouling people's food, hence their name which comes from the Greek word for "snatcher." They also can be considered as Anthropomorphic Personifications of violent winds.

They can vary widely in appearance. They may or may not be subject to the Gorgeous Gorgon effect, or even be a Cute Monster Girl, but they were originally described as ugly and grotesque before the mix up. The subjective ratio of human to bird can also vary from woman's body shape with wings in place of the arms and a birds' feathers and feet to a woman with winged forearms, a feathered body, clawed hands, and birds' feet. In many classical depictions, their arms are their wings. They often come in groups of three, and are often given the names of Aello, Ocypete, and Celaeno.note It used to be two harpies. Virgil added Celaeno as the third. Their wings are usually avian and feathered, but may sometimes be those of bats instead.

This is a Sub-Trope of Monstrous Humanoid and Winged Humanoid.

Related to the other mythological half-woman half-bird creatures, Our Sirens Are Different. Sirens and harpies are confused almost as much as sirens and mermaids, usually by giving harpies beautiful or hypnotic voices, a characteristic that only sirens possessed in Greek myth. This is probably due to the harpies often being portrayed as bird-like, and of course birds are well known for singing.

Harpies frequently appear as relatively small Giant Flyers, almost always as the "Leathery-Winged Avians" variant, of which they may well be the Trope Codifier.

is named for them, and their tendency to be Always Chaotic Evil has led the word "harpy" to be used to describe any unpleasant woman.

As a result of making peace with the Owl Beast in her dream, Eda gains access to a half-woman half-bird harpy form.

As a result of making peace with the Owl Beast in her dream, Eda gains access to a half-woman half-bird harpy form.