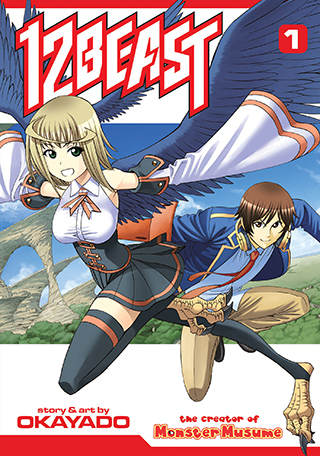 12 Beast is a manga by Pixiv artist Takemaru "Okayado" Inui. Originally a one-shot, it later became a full manga series that was serialized from 2013 to 2020 (starting out in Age Premium, but later moving to Monthly Dragon Age in 2015). The manga is licensed in English by Seven Seas Entertainment.

The one-shot follows the adventures of General Eita Touga, his support staff-member Aero, and their army of mercenary monsters as they try to save the world of Live-Earth from the Gigas, massive machines exterminating the inhabitants, the Autana (the series' term for half-human monsters).

With the might of their incredibly diverse troops, strengths complemented and weaknesses covered; the Gigas Slayer, a steel gauntlet that gives Eita superhuman strength and allows him to borrow Aero's power; and his PSP, tablet and a war game for any and all strategic planning, they travel across the land defending the weak and slaying the anti-Autana weapons... provided they don't die of starvation first or stage a mutiny, as said army is perpetually broke, and Eita can't resist helping the needy and poor.

The ongoing tells the story of how they get there: Eita is a high school ninja gamer from Present Day Earth who'd like nothing more than to keep out of danger, until Aero, a harpy from Live-Earth, shows up to convince him to help protect the Autana, a Gigas hot on her trail.

Eita inadvertantly accepts Aero's request after he trashes the Gigas, and so they set out to save Live-Earth, recruiting their army as they go (including Lamiae, Lizard Folk, Centaurs, Satyrs, Minotaurs, Kobolds, Mummies, Dullahan, Golems, Scylla, and Slimes).

... oh yeah, did we mention the abundance of hot monsters and fanservice?

For Okayado's other works, see Monster Musume and Deadline Summoner.