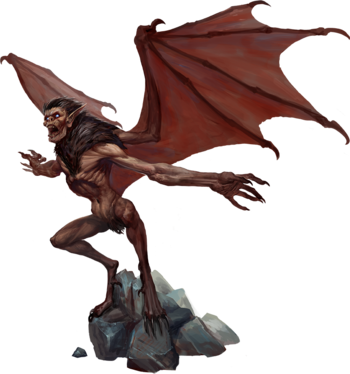 "Yes, father. I shall become a bat."
Advertisement:

Bat people are, plainly put, people with traits of bats, whether they're outright humanoid chiropterans or just humans with a few batlike characteristics. They're typically portrayed as nocturnal, are likely to be villainous or, if not, distrusted by other species, and may have connections to vampires.

Physically, Bat People almost always have bat wings. Much like with Bird People, these may either double as their arms or may be a third, separate set of limbs anchored to their backs. Additionally, they may have other chiropteran traits such as leaflike noses, large ears, entirely batlike heads and the ability to echolocate. Some may even forgo the wings entirely, as long as their other traits show a sufficiently clear connection to bats.

Bat people often live underground, generally within large cave systems. When living on the surface, they're almost always nocturnal and are fairly often found in jungles or other tropical areas.

Because people don't generally like bats very much, batlike humanoids are often portrayed as monstrous and evil, or at least as sinister and frightening. In general, it's also quite common for demonic entities to have batlike wings. If they're benevolent or simply nonaggressive, which in many cases may be played as a deliberate subversion of stereotypes, other species will likely assume that they're evil anyway. This may likely lead to cases of Fantastic Racism.

Finally, bat people may be connected to vampires in some manner, due to the latter's own connection to bats. In some cases, vampires will themselves be Bat People either full-time or in certain transformed states. Even when a vampire just Looks Like Orlok, the resulting pointed ears, pale skin, and fangs will often come together to form a fairly bat-like visage. In others, Bat People and vampires will be distinct but linked groups, connected by supernatural kinship, one group's origins, or even mutual enmity. Regardless of any other link to vampirism, and often even without any such link, it's not uncommon for Bat People to be blood-drinkers. Other times, however, Bat People may be werebats instead.

Subtrope of Beast Man. See also Bat Out of Hell. Bat wings are also a common feature of Big Red Devils and gargoyles — the latter may have batlike ears and faces, as well. See also Harping on About Harpies, whenever harpies have bat features.

Not to be confused with the Bat-Family. For the film also known as The Bat People, see It Lives by Night.

The boss of Level 6 is Wingnut, a monstrous anthropomorphic bat. He is implied to be an alien in this version, riding a UFO in his boss fight.

The boss of Level 6 is Wingnut, a monstrous anthropomorphic bat. He is implied to be an alien in this version, riding a UFO in his boss fight.