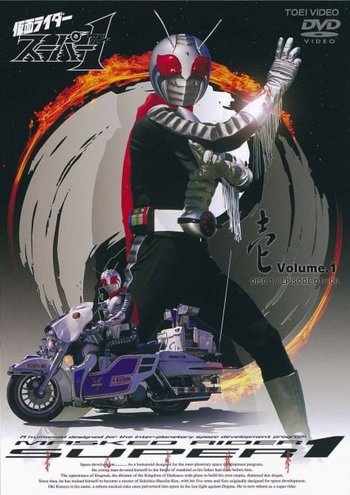 Super-1 and his rather pimped-out ride.
Advertisement:

Kamen Rider Super-1 is the seventh Kamen Rider series lasting from 1980-1981. The titular Rider is Kazuya Oki, an astronaut who is rebuilt by NASA into "Super-1", as a space exploration and development cyborg without the need for bulky external gear. But the Dogma terrorist group attacks just as NASA is putting Super-1 through tests; everyone except Kazuya are killed. Unable to transform of his own volition, Kazuya escapes to Japan, where he trains in martial arts, eventually using it to replace the external henshin command — and getting some fighting skill in the process.

Now not so much a dude with a built-in spacesuit as a force of two-fisted (and two-legged!) justice, he goes after Dogma. He fights Jin Dogma, a second group, later on.

In addition to the main series, there is a Kamen Rider Super-1 movie tie-in where Super-1 teams up with the eight Kamen Riders that came before him.

It is also the final Kamen Rider series to feature Shunsuke Kikuchi's music as well as Shinji Nakae's narration.