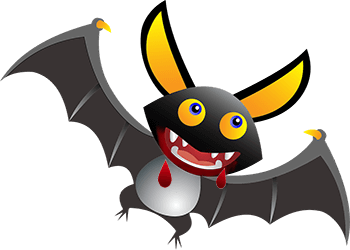 "I am just like a big mosquito, okay!?"
— Vlad, Brandy & Mr. Whiskers
Advertisement:

Bats in real life come in a variety of species, which have a variety of diets. Some eat fruit, while others fly around hunting for insects, but the most infamous group consume the blood of animals like cattle. While they don't "suck" blood in the vampiric sense, they are the inspiration for the creature and, in return, the association with vampires means many fictional bats and their equivalents are considered to be bloodsuckers, or otherwise have a way of draining the life out of their food.

Vampire characters don't count for this trope, as for them sucking blood is just part of the package. As such, this is only for actual bats and their in-universe equivalents. For the vampire scenario, see Vampiric Draining.

Compare Bat Scare, which is another bat-related trope. Subtrope of Bat Out of Hell, as bats of the blood-sucking variety tend to be considered scary or vicious. Not related to Goddamn Bats, but they may overlap.