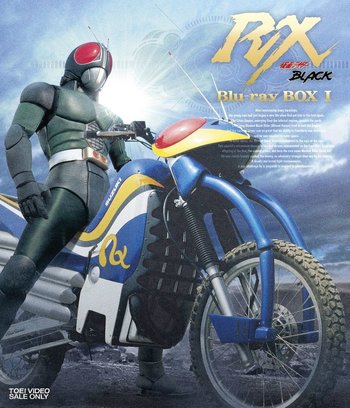 Wake up, the Burning Hero!
"I am the child of the sun! Kamen Rider! BLACK! R! X!"
Advertisement:

Kamen Rider BLACK RX is the ninth TV series in the Kamen Rider franchise and, unusually for the series, a direct sequel to the previous series, Kamen Rider BLACK. It was broadcasted from 1988 to 1989 and was the last TV series aired during the Showa-era before the transition to stand-alone movies throughout the 90s.

After being practically left alone at the end of BLACK, Kotaro Minami has finally gotten on the road to a normal life. He's been adopted by the Sahara family and has a steady job as a helicopter pilot.

However, a new threat to the peace of Earth comes in the form of the Crisis Empire, which seeks Earth as their new invasion target. Acknowledging Kamen Rider BLACK as a threat, they capture Kotaro while preventing his transformation and attempt to goad him into joining the Empire. Kotaro refuses, and as a result he has his King Stone destroyed and gets thrown off to space.

The sun's radiation, however, resurrected Kotaro's Kingstone and split it into two. Thus, Kamen Rider BLACK evolved into Kamen Rider BLACK RX. It also resurrects the destroyed Battle Hopper, upgrading it into Acrobatter. Now, Kotaro must use his new powers to defend Earth from the Crisis Empire, consisting of General Jark, Colonel Maribaron, Naval Commander Bosgan, and Captains Gatenzone and Gedorian.

The Lighter and Softer tone of the show clashed horribly with the Darker and Edgier Kamen Rider BLACK, and fans did not approve. However, it's quite wrong to label it a Franchise Killer, as the series had pretty good ratings (it performed better than Kidou Keiji Jiban, the Metal Heroes series that aired during the same season, and actually scored a slightly higher series average than BLACKnote To elaborate, BLACK scored a 9.2% series average, while BLACK RX scored a 9.3% series average.). It's also notable as the first Kamen Rider series to introduce the concept of form changes, which became a staple of the Heisei era. BLACK RX still remains popular amongst the older franchise, and like its predecessor, it enjoys massive popularity in the overseas market.

Kamen Rider BLACK RX received a 3D film tie-in, Kamen Rider Run All Over The World, that was screened at special events.

This show was adapted by Saban Entertainment (the guys behind Power Rangers) into Masked Rider.

It was the last Kamen Rider TV series Shotaro Ishinomori was involved in before his death in 1998, two years before the premiere of the franchise's next installment, Kamen Rider Kuuga.