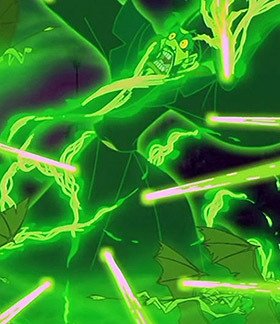 So the Final Battle is finally over. The Big Bad, a powerful personification from hell and/or an homicidal robot from the future, has been struck a lethal blow and is now done for. How does Hollywood celebrate this climactic moment? Easy, by having the defeated foe then die in a spectacular fashion, with lots of special effects and unusual things happening to him, such as explosions, flashes, gradual disintegration, things melting, etc.

Note that this is not just dying in a flashy way, this is when the flashiness comes from the death itself, so for instance a character dying by having a bomb inside him is not this trope, as the explosion comes from the bomb and not from the character's death.

Quite common in video games, especially for bosses—a good death scene is part of the reward for bringing down such an imposing enemy, and frequently Stuff Blowing Up makes for a good death scene.

See also Critical Existence Failure for when death is always a sudden thing, Ludicrous Gibs for gory existence failures. In Video Games, it can become a justification for Everything Fades for Mooks. A supertrope of Disappears into Light.

As this is a death trope, spoilers will go unmarked.