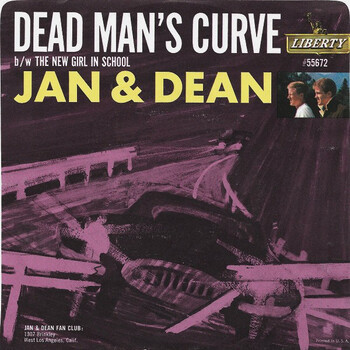 "Oh where oh where can my baby be?
The Lord took her away from me
She's gone to heaven, so I got to be good
So I can see my baby when I leave this world"
— Wayne Cochran, "Last Kiss"
Advertisement:

Teenage Death Songs are songs about dead or dying teenagers. Also called "death rock" (not to be confused with the music genre of the same name

) or "teen tragedy" songs, these were a staple of pop music in The '50s and early Sixties, when Rock & Roll was very much a teenage phenonemon, but they are still written occasionally today.

Often a romantic tragedy written from the point-of-view of the dead teen's girlfriend or boyfriend, but sometimes written as if the dying (or even dead) teen is singing himself. A more bittersweet variation might end with a pair of teen lovers Together in Death. Often, but not always, there are also parents who are sorry they weren't more understanding. Usually a Morality Ballad, and if homicide is involved a Murder Ballad as well. A type of fictionalized Grief Song, though some are based on real people.

Expect spoken word bridges (recited through an echo chamber), sound effects (crashing cars, swishing waves), and some of the most attractively orchestrated arrangements in early rock recordings. Many, though not all, of them are inexplicably upbeat if you don't pay too much attention to the lyrics.

Sometimes also classified as a "Tear Jerker", especially if the age isn't quite right but the trope otherwise fits.

The name is taken from one of the chapter titles used in Stephen King's Christine.

This is a Death Trope, so expect UNMARKED SPOILERS!!!

is dedicated to Teenage Death Songs.

open/close all folders
Automobiles
Aviation
Diseases
Drugs
Gunfights
Homicide
Motorcycles
Perils of nature
School shootings
Suicide
Jimmy died today
He blew his brains out into the bay
In this state of mind
It's my own private suicide.
War
Weird causes of death
Near misses
Sometimes the scythe of the Grim Reaper misses its swing. Here are some examples:
Other