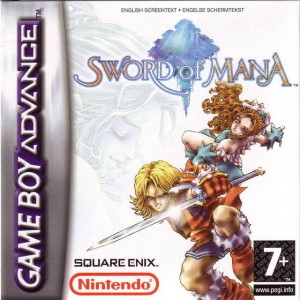 Sword of Mana, released in Japan as Shin'yaku Seiken Densetsu (新約 聖剣伝説) or The New Testament: Legend of the Holy Sword, is a Video Game Remake of the first game of the Mana series with many of the Final Fantasy references removed and many added details from the later games inserted. It was released for the Game Boy Advance in late 2003. Faithful remakes of the original 1991 video game were released in 2006 exclusively for Japanese mobile phones and in 2016 for iOS, Android, and PlayStation Vita.

Not so very long ago in the kingdom that would become known as Granz, a knight and sorcerer named Vandole stumbled upon the Mana Tree, inadvertently absorbed its power, and (of course) proceeded to slowly lose his mind and sense of self. He established an empire that abused Mana to power its technology, had a reign of terror, and was eventually vanquished by a small but powerful band of heroes. A bit of time has passed since, and those heroes had begun to settle down and stabilize the world, when trouble (naturally) reemerged. Stroud ...oh, please excuse me, Dark Lord (son of Granz, one of the previous generation's heroes) and his... um, friend Julius staged a bloody coup of the Granz regime and began a vicious persecution of the Mana tribe. In so doing, two young children—the son of one of the Granz aristocrats and a girl of the Mana tribe—have their lives very violently disrupted: the Mana tribe is wipled out and the girl is forced to go into hiding, while the boy's parents meet a similar fate. He isn't as lucky as her, and is forced to fight as a gladiator for Dark Lord's amusement.

Ten years later, the boy makes an escape and the girl starts out on a journey to find other Mana tribe survivors. They bump into each other again, and destiny ensues.

Like many of the other "old-school" Seiken Densetsu games, Sword of Mana allows the player to choose whether to play as the hero or the heroine. Unlike other Seiken Densetsu games, though, there are significant differences depending on who you choose to play—the hero's route has slightly more focus on dungeon gameplay; in the heroine's story, the characters (particularly the villains) are MUCH more well-developed.

Also like many other "old-school" Seiken Densetsu games, Sword of Mana's story is wrought with angst, and a great many main characters die. Good luck not getting attached to any of them, though.

Sword of Mana contains examples of the following tropes: