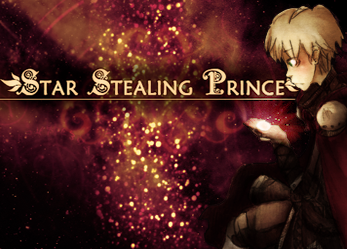 ). The prince of the title is Snowe, who has inherited the snowy kingdom of Sabine after the deaths of his mysterious parents, King Edgar and Queen Lina.

One night, Snowe has a bizarre dream in which a shadowy figure boasts of its intent to murder Astra, a young woman in a nearby tower. His innocent quest to rescue her sets in motion a series of events that will reveal the truth about the powerful, complex magic that sustains his kingdom. However, he won't be alone in his quest for the truth. His allies are Astra, her loyal undead guardian Hiante, her loyal demon Erio, and later, a bitter (though good-natured) sentry named Relenia.

Released in early 2012, Star Stealing Prince has already earned considerable acclaim from the RPG Maker community for its combination of endearing characters, twisty plot, challenging gameplay, and a ton of original artwork. In 2013, it won eight Misaos (the RPG Maker community's version of the Oscars), including Game of the Year. It can be downloaded at the official site.

There are also four short stories written some time back, which expand on some past events in the game's story. They can be found here