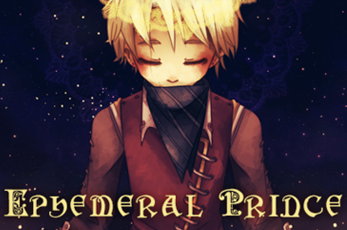 Ephemeral Prince is a Web Serial Novel sequel to the freeware RPG Maker game Star Stealing Prince. According to creator Ronove, both endings from the game are canon. There are two parts to the sequel, Fleeting and Permanence. There is also a group of short stories set between Fleeting and Permanence, which are collectively called Intermission.
Advertisement:

Warning: It is not recommended to read this page if you intend on playing Star Stealing Prince, as this page contains major, major spoilers for that game by its very nature.

Fleeting follows the game's bad ending. Snowe washes up on the shore of another land, with terrible scars and barely alive. While the people who find him are able to bring him back to health, he has no memory of what happened. Snowe tries to piece his life back together and remember what happened, but his new home isn't safe.

Permanence follows the game's good ending. Snowe and his people arrive in Aldcoast and settle into their new lives...however there's a feeling of dread Snowe can't shake, and he still has that demon trapped within him...

Ephemeral Prince can be read here