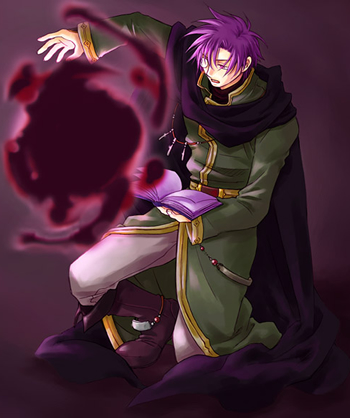 Elder magic, not dark magic. Get it right.
"I have seen the night torn into thin darkling strips and woven into shapes too bleak for dreams."
— Crovax, Strands of Night,

Darkness is arguably the most unique element in existence (though it's also arguably the most abundant thing in existence) and thus one of the most eldritch forces of nature one can warp. This actually makes sense, given you're bending a Primal Fear that is literally nothing more than the absence of light.

Whereas darkness as an element is frequently portrayed as acting nigh-identically to its polar opposite, Light, with characters "projecting" darkness as one would light, the shadow element is usually focused on creating things— typically corrupted or imperfect copies of something else, or intangible illusions. Characters are also sometimes able to use shadows to teleport. Either form is often used in systems that allow the combining of abilites to create "dark" versions of other powers by combining Casting a Shadow with other Elemental Powers or other power sets.

Shadow powers frequently act as the inverse of Hard Light — shadow-beings or creations of pure darkness will be able to affect the world as if they are solid objects. If a shadow being is the Living Shadow animated from an existing being, the victim probably Casts No Shadow unless it is returned. Some portrayals of elemental shadow or darkness paint it as a sort of life-devouring ectoplasmic goo. Also, beware of those who can root you to the spot just by shadow contact or summon Tendrils of Darkness, because you're probably not getting away from them. Because the shadows are often associated with stealth, don't expect these people to fight fair.

Given the prevalence of Dark Is Evil, darkness as an element is often used by villains in a clear-cut case of Bad Powers, Bad People. Even when Dark Is Not Evil, darkness-based powers are almost always relegated to Anti-Heroes and other morally grey individuals. It wouldn't do to have the white side of Black-and-White Morality use darkness-based powers, after all. Either way, darkness-based powers are frequently associated with negative emotions — fear, hatred, anger, pain, etc. As probably the most Primal Fear in the human psyche, don't expect darkness to be pleasant, even when it's not actively malevolent (unless it's The Sacred Darkness). Evil darkness-users will often play this up, luxuriating in their evilness, whereas others will usually become The Stoic (suppressing their negative emotions by suppressing all their emotions) or just have a lot of Angst to deal with.

If these guys are heroes, then they will often be a Byronic Hero, but it is not impossible for a person with this trope to be a Perky Goth, if even that.

Characters using darkness-based powers are sometimes Weakened by the Light, which may be shown by having Casting a Shadow opposed by Light 'em Up or Holy Hand Grenade in Elemental Rock–Paper–Scissors. When the two are compared, that's Light/Darkness Juxtaposition. When they're combined, however, the result is a Yin-Yang Bomb. See also Unholy Nuke. These powers usually Kill the Lights. See also God of Darkness.