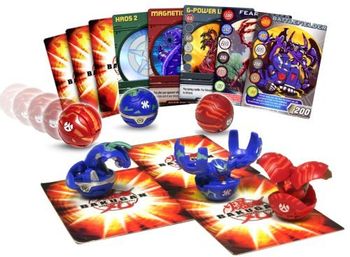 Bowling for cards. And you thought Chaos Orb was fun.
Advertisement:

The Bakugan Collectible Card Game/Collectible Figure Game that is mostly known (Or unknown) for being the basis of the card game behind the beginning of the Bakugan anime.

It began with B1s/Battle Brawlers (which were slowly phased out due to being choking hazards) and replaced with B2s (Battle Brawlers), followed by B3s (New Vestroia, some of the first Gundalian Invaders sets also held the B3 logo).

The game was a state of limbo anywhere outside of Japan from 2012 to 2016, as the B5 sets are still being sold but nothing new has been announced while Japan had reset the namings style as Bakutech! and later Bakugan Armors instead of B#, the former due to the launch of the Bakutech Bakugan anime, while also introducing a ruleset called "Gachibaku".

In 2019, a reboot of the franchise called Bakugan: Battle Planet was released. A new anime produced by CTV and animated in Japan was created to promote the new toy line, which includes a significant redesign of the transforming marbles. The designs and details make them look more like the monsters they are meant to represent rather than the mostly stylized and semi-robotic aesthetic used for the older series. They also come in two varieties: Core and Ultra Bakugan. Core Bakugan are simpler and easier to transform with generally lower power ratings, while Ultra Bakugan are more complex and detailed with many having special abilities. The gameplay has also been largely reworked, using BakuCores instead of Gate Cards and optionally a fully developed TCG with players using decks of 40 cards to add complexity to the otherwise basis game. The basic B Power of a Bakugan can actually be the least important part of the game once the Core Bonus/Penalty and any cards played that turn are taken into account. The Battle Brawlers name still appears on packaging but in an ambiguous context.note On toy packaging, it appears on the side in small print and seems to mean the transforming marbles are Battle Brawlers. On TCG packs, it appears much larger as "Battle Brawlers Booster Pack", suggesting the card game is called Battle Brawlers. Putting this together implies the toyline is properly referred to as Bakugan: Battle Planet: Battle Brawlers. The official website and mobile app do not mention Battle Brawlers at all.

Each player starts with three Bakugan, three gate Cards (Each of a Different Colour) and three ability cards. Optional are Bakugan Traps and Battle Gear. The object of the game is to get Bakugan to win Battles, therefore ‘winning’ that Gate Card. Battle ends when three gate cards are won by one person. The Battle begins in three phases.

Players are then free to either set more Gate Cards or Roll Bakugan, or both. Rolling of Bakugan is required and once one is rolled it is put into the used pile until all three are used, at which it is returned to the unused pile. Ability Cards can only be used once unless stated so on the card, therefore putting them in the used pile permanently..

There are six attributes based on the elements. Each with its own unique style.

The rules are based on Battle Brawlers' rules. However, Ability Cards and other items affect G-Powers may not be used, and any text on Gate Cards, other than the bonuses, are disregarded.

At the start of the game, both players places 3 Gate Cards, forming 2 L shapes at the center of the field.Once the cards are placed, the game starts. Players can win by either getting 3 Gate Cards or by timeout, which happens once 15 sets are done, and determines the winner by how much Gate Cards the players own at the moment.

Each player has three Bakugan and their associated Character Cards, 6 BakuCores (based on the requirements shown on the Character Cards), and optionally a 40 card deck of Ability Cards.

The game provides examples of

The Mons themselves provide examples of: