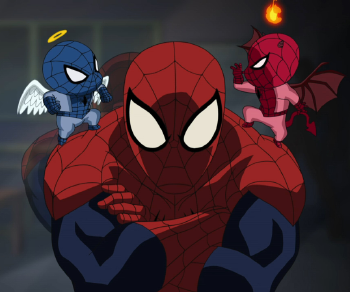 When someone wrestles with a temptation, two miniature versions of the character’s self, an Angel and a Devil, sit on each shoulder and try to pull the character in different directions. The Devil will invariably be on the left (the conflicted character's left, or "sinister") shoulder. Alternatively, as in Full House ("The Devil Made Me Do It"), the Angel and the Devil may manifest as life-sized people on either side of the conflicted character rather than as miniatures on the character's shoulders.

Expect a female character's Devil to dress all Stripperiffic, to invoke Evil Is Sexy, Horny Devils, Hot as Hell, and Sensible Heroes, Skimpy Villains. Thanks to how common this trope is, it's generally given some kind of parodic twist. If a character is particularly bad, it's common is to give that character two Devils (and vice versa for particularly good characters). Another is for the Devil to kill, injure or incapacitate the Angel, leaving only the devil as counsel (or vice versa). Occasionally, the two may end up agreeing, usually in the form of the Angel giving in to a violent choice, particularly if it's well deserved. Sometimes the Devil for a male character mentions that the angel wears a "dress." ("It's a robe.") It is far less common for the angel to tell the Devil to Please Put Some Clothes On. As the conversation among the three progresses, it may drift away from anything to do with good or evil and resemble a Seinfeldian Conversation involving Metaphorgotten or Sidetracked by the Analogy. That being said, it is Played for Drama occasionally. In this case, the trope is still likely to be played with, since it's very hard to write shoulder advisors seriously; the Good Angel and Bad Angels are likely two separate characters, a well-meaning friend and a Token Evil Teammate respectively trying to sway the protagonist to their side and arguing over the best action. If still part of the protagonist's mind, the Good Angel and Bad Angel are likely hallucinations or encountered in a Journey to the Center of the Mind, and usually something far more abstract than an angelic and devilish version of the character.

The technical, if somewhat dated, term for this is the Psychomachia ("Battle of the Soul"); in its original version, this implied a full-scale war between all of an individual's personified virtues (such as Humility, Chastity, Patience, etc.) against his personified vices (Pride, Lust, Anger, etc.).

To put in more or less psychological terms, what we have is a kind of Freudian Trio, with the Devil as the Id, the Angel as the Superego and the person whose shoulders they stand on as the Ego.

Has nothing to do with Angel/Angelus from Buffy the Vampire Slayer and Angel nor the Good Cop/Bad Cop routine.

It's probably worth mentioning that Angel Strong Bad is noticeably shorter than Devil Strong Bad.

Whos the Cat & Whos the Mouse?

Tom is upset that Jerry is living luxurious in the hotel. Thatâs when his Angel & Devil selves show up to tell him whatâs the best thing to do?<br><br><br><br>Of course he listens to his very persuasive Devil self.

Whos the Cat & Whos the Mouse?

Tom is upset that Jerry is living luxurious in the hotel. Thatâs when his Angel & Devil selves show up to tell him whatâs the best thing to do?<br><br><br><br>Of course he listens to his very persuasive Devil self.