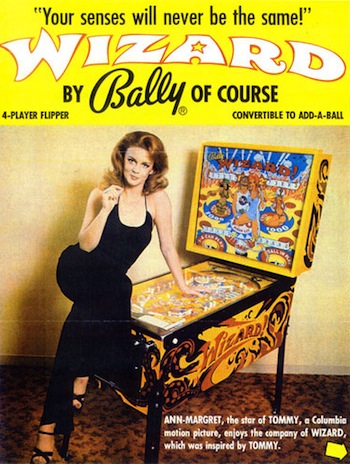 Wizard! is an electro-mechanical pinball machine released in 1975 by Bally. Designed by Greg Kmiec with artwork by Dave Christensen, it is based on the Tommy rock opera movie, and the backglass features the likenesses of Roger Daltry and Ann-Margret.

Like most electro-mechanical pins, Wizard! doesn't have any sort of overarching theme beyond achieving a high score. In addition to shooting various targets for points and Specials, the player can flip the table's "Flip Flags" with the rollovers positioned around the playfield. This then increases the value of the flags, allowing skilled players to collect them all with a clockwise orbit around the table and into the right channel.

Pinball buffs consider Wizard! to be one of the field's representative tables and a sterling representative of the electro-mechanical era. The classic seventies-era art compliments the feature-filled playfield, while the fast action and flip flags keep the player's attention; as a result, Wizard! ended up being one of the top-selling pinballs of 1975.

A semi-sequel, Captain Fantastic and the Brown Dirt Cowboy, was released a year later.