Audio Play / I Think We're All Bozos on This Bus 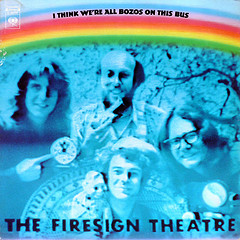 "Man, woman, child—all are up against the Wall of Science!"
Advertisement:

I Think We're All Bozos on This Bus is a science-fictional comedy album by The Firesign Theatre. The forty minute story took up the entire album, with one track on each side. Originally released in 1971, it was one of the earliest works to feature a computer hacker as a main character.

The hacker, called Clem, appears to be an ordinary Joe who spontaneously boards a bus headed to The Future Fair, where he meets a Bozo (apparently a sort of clown) named Barney. When the two arrive, they are greeted by cowboy-themed vegetable holograms. (Did we mention this piece is rather surreal?) Barney and Clem split up, and Clem goes to ride the "Wall of Science", where he is treated to a lengthy and very silly recap of the birth of the universe, the rise of man, and the development of science. When this is done, he decides to go see the President, an animatronic device (with a voice like Richard Nixon) that you can ask questions and get platitudes in response. Here, he begins his first hacking attempt, which only crashes the President and gets him ejected from the ride.

Outside the President ride, Clem encounters Barney once more. With security holograms chasing him, Clem again shows his hacking skills by taking over one of the holograms. He uses that to create a hologram-clone of himself (the term "Digital Avatar" had not yet been invented), which he sends back to "the Shadows" (the word Cyberspace had not yet been invented) to try to take over Dr. Memory, the fair's controlling central computer.

But the plot is mostly an excuse for a non-stop series of humorous vignettes parodying culture, science, politics, and mankind in general.

The album was nominated for a Hugo Award for Best Dramatic Presentation (a category usually reserved for movies).