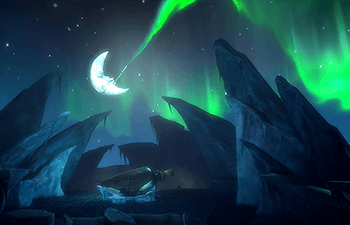 Smoking doesn't usually look this cool.
Overhead, in the sky, there shimmered two lines of light that swayed and faded in and out of each other in the sky. Boss watched them in awe, still not quite understanding them. They had no smell, made no sound, and yet they danced in the air above them, like two angry dogs made of light fighting each other.
— Soldier Dogs: Battle of The Bulge
Advertisement:

An aurora borealis — or australis in the Southern hemisphere — is a phenomenon occurring near the poles of the Earth when particles coming from the sun (known as the solar wind) gets aspired by the planet's magnetic field, whose poles are conveniently almost at the same place as the Earth's rotation poles. This creates magnificent and breathtaking light-shows that colour and illuminate the polar skies. Auroras are predominantly green, but they are known to come in other colours as well.

Do note that these aurora-filled Slippy-Slidey Ice World settings also mostly take place at night, in a rather convenient way. Else, how could we see them?

In at least the northern polar region, it never gets very dark in the summer nights, so it needs to be winter, autumn,or spring for the lights to be visible well or at all.

Little Anna: The sky's awake. So I'm awake. So we have to play.

Film — Live-Action
Literature
Mythology and Religion
Video Games
Visual Novels
Western Animation
Aurora borealis? At this time of year, at this time of the day, in this part of the TV Tropes Wiki, localized entirely on this page?!