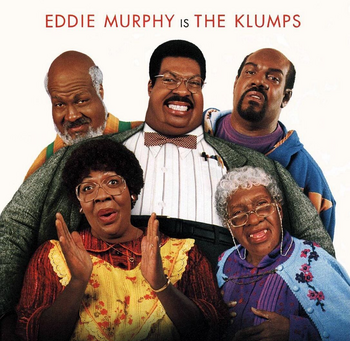 "David Warner, you are under arrest by order of David Warner!"
— Crow T. Robot, The Quest of the Delta Knights
Advertisement:

The character you know and love walks off set on one side, and a couple of seconds later walks in on the other side, only he's wearing different clothes! And talking funny! And everyone's calling him Cousin Rick, not Fred!

For many a reason both solid and sordid, an actor might find themselves playing more than one role on the same show. It might be a twin brother (or cousin, aunt, etc. — television has never been fussy on the details). A male character may be put in drag to play his own mother, who looks a lot like him. More than a few action shows have had a lookalike try to frame the main character. Whatever the reason, the actor is Acting for Two. Sometimes more, depending on the role.

It happens occasionally in other media as well, but when the same actor plays multiple characters on TV or in a film, it usually has a very specific purpose. In theatre, it's just as often an economic use of talent. Often certain role-pairings become traditional, so for example some film versions of Peter Pan still cast the same actor for Hook and Mr Darling - even though they could afford two actors, and the stage tradition only arose because of their lack of scenes together. Maybe because it seems symbolic of... something.

This tradition goes way way back. Classical Greek drama was usually performed by two or three actors (wearing masks) plus chorus. As a result, you never see more than three principal characters at the same time, in very specific combinations: Hecuba talks to Cassandra and a Greek Herald, then Cassandra goes offstage (and changes masks) and comes back on as Andromache, then Andromache and the Herald go offstage and come back as Helen and Menelaus... To this day "doubling" of roles is common in theatre, especially in No Budget productions.

This particular little ice cream cone comes in several flavors, depending on the purpose, and varying in utility by medium:

See Double Vision for a look at how they manage the trick of getting an actor on-screen more than once, when needed.

Understandably this happens a lot in animation, simply by giving the same voice actor multiple roles; see Talking to Himself for that version. Not to be confused with Talking to Themself, in which the actor plays different personalities of a single character in-story. For the other kind of "acting for two," see Hide Your Pregnancy.

Nearly all of Ryan George's videos have him play all the characters, who frequently interact with each other. "The First Guy To Ever Be An Artist" has one of his characters allude to this, remarking to another character how they look so similar.

Nearly all of Ryan George's videos have him play all the characters, who frequently interact with each other. "The First Guy To Ever Be An Artist" has one of his characters allude to this, remarking to another character how they look so similar.