Film / The Fun, The Luck & The Tycoon 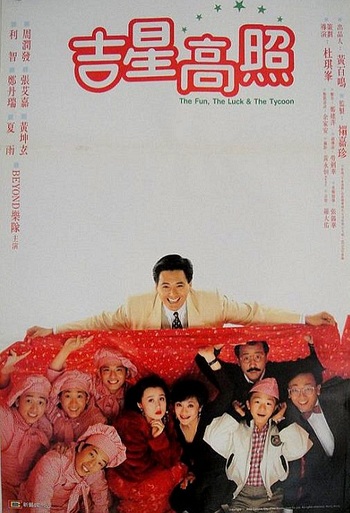 Chow Yun-fat, Beyond, oh my!
The Fun, The Luck & The Tycoon (吉星拱照) is a 1990 comedy movie directed by Johnnie To, starring Chow Yun-fat, Sylvia Chang, Nina Li Chi and Lawrence Cheng.
Advertisement:

Meet Lam Bo-Sang (Chow), the richest man in Hong Kong with the wealth to build a space station. Tired of his luxurious lifestyle after hearing that it would take years, if not decades, for a commoner to afford extravagant jewelry and other luxury items by earning on salaries from working in the jobs of ordinary people, as well as the unappealing prospect of an Arranged Marriage with his cousin Cindy Chan (Li), Sang leaves his home in pursuit of the lifestyle as an ordinary man, as well as looking for a woman that he indeed truly loves.

At a charity gala, Sang meets Hung Leung-Yuk (Chang), the sister of Hung Tung Tung (Ha Yu), who runs a noodle restaurant and a catering company under his name. In order to get close to Yuk, Sang applies to work at Tung's company. Hijinks ensue with the employees there, consisting of four brothers (Beyond) who aspire to become a boy band and bratty kid Rocky Ma (Wong Kwan-yuen), as well as complicating Tung's plans to have Yuk to propose to Jimmy Chiu (Cheng). Meanwhile, as Sang's butler Fatso (Wong Sam) supports and approves of the romance between Sang and Yuk, his grandaunt (Ouyang Sha-fei) and Chan demand to locate Sang's whereabouts to ensure the arranged marriage goes on as planned.

From its premise, one can say that this movie is Coming to America IN HONG KONG! but more family-friendly. Although the similarities between those movies end in the "rich boy leaves his rich lifestyle to seek out ordinary girl" story, The Fun, The Luck & The Tycoon proves to be a fun movie with a share of romantic and hilarious moments.

The Fun, The Luck & The Tycoon provides the following tropes: