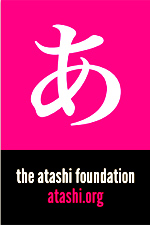 Does it chronicle the birth of a nation? Is it a tale of romance, obvious or not? Is it art? Or is it the ramblings of a wannabe artist?

What is known about atashi.org

is all that you want to know, if you search deep enough. Enigmatic in its layout, and sometimes even more puzzling in its contents, atashi.org is the result of a newborn growing, and discovering itself.

Filled with poems, short stories, sometimes puzzling imagery, and lots of things to click, atashi.org hosts a body of work waiting to be explored.