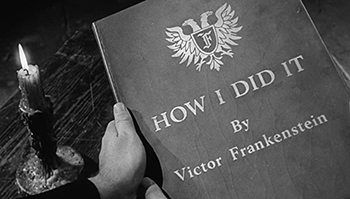 Kryten: Sir, the Space Corps Directives are there to protect us. They are not a set of vindictive pronouncements directed against any one person.
Rimmer: Has anyone ever seen this legendary Space Corps Directive Manual?
Lister: Well...no.
Rimmer: He's making it up, isn't he? The bloody book doesn't exist!
— Red Dwarf, "Quarantine"
Advertisement:

All the books, magazines, and newspapers that exist only within a fictional world, from the Necronomicon to the mysteries of Jessica Fletcher. They are more common in Speculative Fiction, but not restricted to it.

They serve two main narrative purposes: verisimilitude and exposition. Jessica is supposed to be an author. It would be bizarre if no trace of the books she writes existed. Reading the Necronomicon may frighten the protagonist half to death, but it also gives the reader an idea of the Backstory.

Fictional documents are also used to comment on literary tropes, and as aids to characterization. Characters comparing their own predicament with their favorite book can get very sarcastic about how unrealistic it was, while few things so embarrass the Action Girl as having her little brother read aloud a few choice passages from her favourite romance. Sometimes, however, you may just have to Take Our Word for It.

Sister trope to Show Within a Show, Fictional Video Game, and Fictional Painting.

Common types of fictional document include:

If your story is made entirely of Fictional Documents, it's a Scrapbook Story (so please list it there rather than here). If the paratext quotes from these, it's quoting the Encyclopedia Exposita. And if the story itself appears in the story, it's Recursive Canon. If it merely claims to have been written by a character within the setting, it probably falls under Direct Line to the Author. In Video Games, they are almost always used as Flavor Text.

Carole gushes to Helen and Laura over I Believe, the book Mr. Brittas has published in the time between Series 4 and 5.

Carole gushes to Helen and Laura over I Believe, the book Mr. Brittas has published in the time between Series 4 and 5.