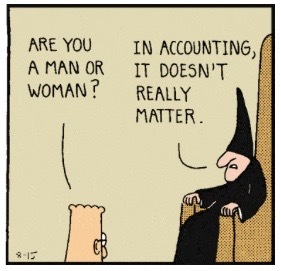 "I am the riverman. Or am I the riverwoman...? It doesn't really matter."
— River Person, Undertale
Advertisement:

Halfway between Lady Looks Like a Dude and Dude Looks Like a Lady is a character who in some way defies the conventions of male and female, and no-one can decide which side, if any, the character actually belongs on. Lots of subterfuge always follows, as everyone follows them around to try and determine their gender once and for all. Expect a Gender-Blender Name, lots of Gender-Neutral Writing and Pronoun Trouble. Usually, their gender will never be revealed, and no-one will be any the wiser, usually subject to The Un-Reveal.

The technical term for this kind of person is "androgyne", from the Greek for "man-woman." Used as an adjective, it's "androgynous".

See also Viewer Gender Confusion, something which invoking this trope may cause to persist even if the character does get a Gender Reveal. Also compare Alien Gender Confusion, when a member of one group seems ambiguous by the standards of another. Compare and contrast No Biological Sex, for characters who have no physical sex, and Hermaphrodite, for characters who have more than one. They may or may not look as androgynous as the ones whose gender is simply ambiguous. Can be one of the attractive things that leads to Everybody Wants the Hermaphrodite. There's also Purely Aesthetic Gender, for characters whose assigned genders are trivial for gameplay.

Compare Crossdresser, who may be attempting to invoke this trope. Do not confuse this with Ambiguous Gender Identity, which is about ambiguously transgender characters. Also do not confuse with characters having non-binary gender; this trope is about unknown gender.