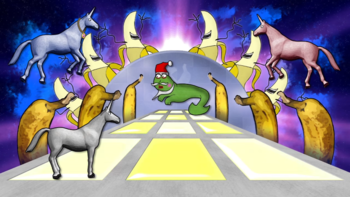 One of the very first viral hits to come out of YouTube, Charlie The Unicorn is a series of very silly animated videos created by FilmCow. It depicts the short adventure of two absent-minded unicorns, one pink and one blue, dragging their "friend" and Only Sane Man Charlie, a gray unicorn, on adventures which almost always end in him on the receiving end of some humiliating, traumatic pain.

In the first installment

, originally released on Newgrounds in November of 2005, Charlie is coerced into venturing to the magical Candy Mountain. A sequel

came out three months later, this time following their quest to return the magical amulet to the Banana King. The following year saw a third episode

about saving the future. Popular demand led to the creation of a fourth installment

three years later. A Grand Finale was funded through Kickstarter

and is set to be released in six installments, the first

appearing in October of 2019. The completed Finale was released on October 23, 2021, finally bringing the series to a close.

A pair of possibly canon one-shot

were released for the YouTube Live event, as well as another

advertising Charlie the Unicorn merchandise at Hot Topic, and this one

for the Playlist LIVE event.

Then there's the spin-off/parody/mindscrew videos, charlie teh

). Be warned that the only thing that you will learn from watching these is that the Liopleurodon is named Leo. No joke. There's also a dragon at the Poconos, and unicorns puke rainbows, and they are also pyromaniacs, and they like pancakes. Word of God says that they're basically what Charlie the Unicorn would be like if it was written by YouTube commenters. Word of God has also stated that there is going to be one more charlie teh unicron episode similarly to the Grand Finale.

(His face as he says this and Patrick-like voice really drive it home.)