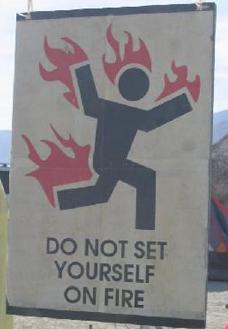 The human body is unexpectedly flammable, resulting in characters, particularly Spear Carriers, Red Shirts, Evil Minions, and Dragons being engulfed in flames and walking or running around the scene. Thus ensuring steady work (and a lot of money) for stuntmen. These days it's as likely to be used for comedy as to be used straight.

Rarely will the character even attempt to "Stop, Drop and Roll", a safety technique often taught to kindergartners. The lit victim will always run around in a screaming panic, just causing the flames to get bigger.

(This has some Truth in Television in that most amounts of fire don't kill quickly, and burning is one of the more painful ways to get hurt.)

Not to be confused with the Denzel Washington film of the same name, which doesn't feature a literal man on fire. Or with the Human Torch. Or with Burning Man.

Sub-Trope of Made of Incendium. For the self-destructive version, see Self-Immolation. For the version that seemingly happens without any kind of external ignition source, see Spontaneous Human Combustion.

Compare with Playing with Fire, Wreathed in Flames, and Infernal Retaliation. See also Kill It with Fire and Incendiary Exponent. Contrast Immune to Fire.

NOTE: the folks here at TV Tropes do not condone setting yourself on fire. Because fire hurts. A lot.

Also, due to the risk of death associated with being on fire, be prepared for unmarked spoilers.

Fires in the Corridor

Mr. Brittas tries to put out a fire set by Gavin's mentally unstable wife-to-be Jenny. Only problem is the fire spreads to his pants.

Fires in the Corridor

Mr. Brittas tries to put out a fire set by Gavin's mentally unstable wife-to-be Jenny. Only problem is the fire spreads to his pants.