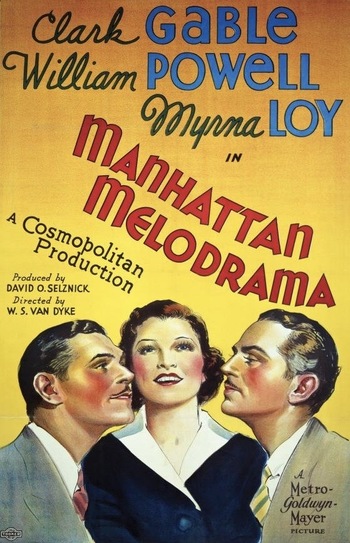 Taking place in New York City, it's centered around the lives of two orphans raised as step-brothers, one of whom, Blackie Gallagher (Gable), grows up to be a gangster. The other, Jim Wade (Powell), becomes the assistant district attorney. Despite being on opposite sides of the law, they still care for each other. However, a Love Triangle and criminal happenings begin to put a strain on their relationship.

So, essentially, Exactly What It Says on the Tin.

This film is notable for being the first pairing of Powell and Loy, who made fourteen films together for MGM. It also features Mickey Rooney, several years before the Andy Hardy films made him a superstar, playing Blackie as a boy. Mostly though, it's remembered because it was the movie John Dillinger had just seen before he came out of the theater and was gunned down by the FBI. Myrna Loy would later express distaste for how MGM exploited the publicity surrounding Dillinger's murder, and producer William Randolph Hearst had his name taken off the credits. Scenes from this film are included in Michael Mann's film about Dillinger, Public Enemies.