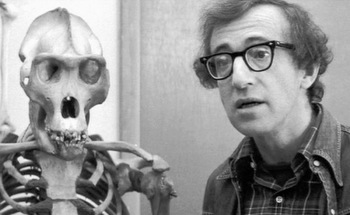 "And now look. This is what happens to us."
"An idea for a short story about people in Manhattan who are constantly creating these real, unnecessary, neurotic problems for themselves because it keeps them from dealing with more unsolvable, terrifying problems about the universe."
— Ike, speaking into his tape recorder
Advertisement:

One of Woody Allen's best-known films, the 1979 comedy-drama Manhattan is almost universally beloved by fans and critics and famously loathed by the director himself, who even asked United Artists not to release it.

The plot revolves around a group of intellectual, semi-bohemian friends living in Manhattan, every one of whom has his own problems, intertwining with those of the others. Isaac "Ike" Davis (Allen) is a neurotic, self-ironic, impulsive, middle-aged aspiring writer, whose wife Jill (Meryl Streep), the mother of his son Willie, divorced him after discovering that she's in fact a lesbian and now is writing an autobiographical novel about their former relationship. Tracy (Academy Award nominated Mariel Hemingway), his 17-year-old lover, has to deal with her growing love towards Ike and the age difference between her and the majority of Ike's friends. Ike's friend Yale (Michael Murphy) dreams of becoming a writer, even though his wife Emily (Anne Byrne) strongly suggests that it's time to settle down and have kids; his life changes even more when he meets Mary (Diane Keaton), an extroverted, erudite journalist. Mary quickly becomes infatuated, but it is hard for her to say whether the object of her feelings is Ike or Yale. Also in the mix are Mary's ex-boyfriend Jeremiah (Wallace Shawn) and Jill's new partner Connie (Karen Ludwig). First, Hilarity Ensues, then, as usual in Allen's works, things become more complicated.

In many respects it resembles Annie Hall: not only because a female protagonist is played in both films by Diane Keaton but also because it shows that the most important problems associated with relationships simply cannot be solved once and for ever - all this in a typical Allenian sweet-and-sour, self-ironic mood. However, in Manhattan the distinction between primary and secondary characters is much more fluid, so the movie is more about the particular situations than persons. One of the important subjects explored is maturity and its relation to the conflict between emotions and reason; however, this being a Woody Allen movie, it is mainly about love, human imperfection and the difficulties which stem from them.

Noted as one of the first films to be released on home video in the Letterbox aspect ratio, paving the way for widescreen video releases, primarily on LaserDisc. The letterbox format was actually requested by Allen himself, wanting to preserve as much of Gordon Willis' cinematography as possible.

Not to be confused with the 2014 television series Manhattan.