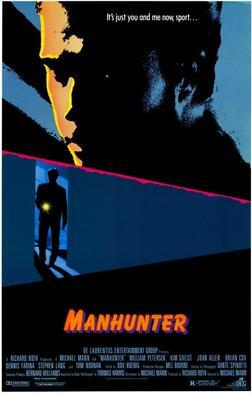 The first Film of the Book of the Thomas Harris novel Red Dragon, this 1986 film, written and directed by Michael Mann for the De Laurentiis Entertainment Group, features Hannibal Lektor (note the spelling) as played by Brian Cox. Like in The Silence of the Lambs, he is used to help an FBI investigator. His name is Will Graham (William Petersen) and he is trying to find a serial killer known as Francis Dollarhyde (note this spelling too), nicknamed "The Tooth Fairy". As he tries to find the serial killer, Graham's personal demons start to haunt him, affecting his work and his relationships.

Unlike later adaptations of the Hannibal Lecter novels, Manhunter relies heavily on saturated colors and overpowering music. Mann carried over much of the film's style from his earlier work with Miami Vice and To Live and Die in L.A..

The film was later re-made in 2002 as Red Dragon, this time acting as a prequel to the 1991 adaptation of The Silence of the Lambs instead of a self-contained work.