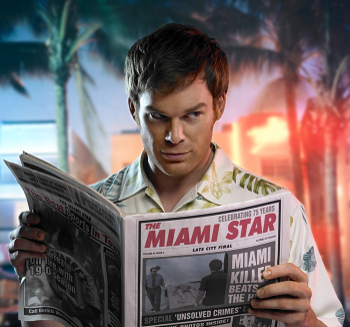 "But with a solve rate for murders at about 20%, Miami is a great place for me. A great place for me to hone my craft. Viva Miami."
"If Miami hasn't got it, nobody's invented it yet."
— Vinne Marco in a first season episode of Miami Vice
Advertisement:

Ever since a certain 1980's detective show, Miami, FL has become a favorite destination of TV and movie writers (and makers of certain video games involving homicide and car theft.)

It makes sense. If aliens, terrorists, or Mother Nature decide to smite a city, they'll go for one of those other two first. It has all the warmth and tropical glamor of the West Coast, but with an East Coast hipness. You might mistake it for Hawaii at first glance.

If you believe TV and the movies, Miami is the only city in Florida. The state's other major metropolitan areas — some of which have populations in the multiple millions — are either treated as merely being suburbs of Miami or else are ignored entirely. You would also think that everyone lives in Art Deco mansions, wears the latest designer sunglasses, speaks Cuban-accented Spanish (or Cuban Spanish-accented English), has access to a speedboat and takes off their sunglasses at the slightest provocation. Not quite Truth in Television. Nobody actually takes off their sunglasses--it's too bright for that. The abundance of palm trees however is true, as are the boats (though there are usually more yachts than speedboats), thanks to Miami's proximity to both Biscayne Bay and the Intracoastal Waterway.

is the biggest urban area in the state, and ninth largest in the United States (it isn't the largest city proper in the state; that would be Jacksonville, which is also the largest city by square mile in the continental United States). Miami has the opposite issue from Jacksonville: whereas Jacksonville has a low population spread out over a truly huge city, Miami/Dade has a ton of tightly packed, separate municipalities which are really just fancied-up neighborhoods of a single city.

Miami has the largest immigrant population of any city in North America, just ahead of Toronto, thanks to its large Caribbean and Latin American communities and it is one of the few major American cities where a majority of the populace primarily speak a language other than English.

People in other parts of Florida have noticed that this trope is in action, and they really, really aren't happy about it.

Completely (well, mostly) unrelated to Only in Florida.