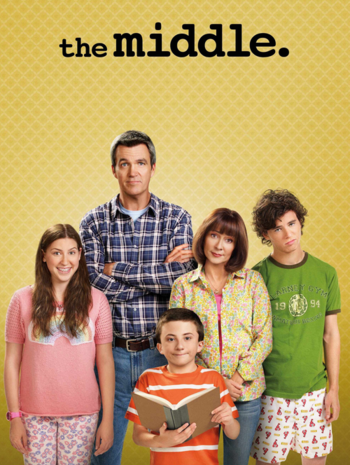 Frankie Heck (Patricia Heaton) and her husband Mike (Neil Flynn) live in the Midwestern town of Orson, Indiana. Frankie first works as a saleswoman at "Ehlert Motors" before moving on to dental hygiene, and Mike is the manager at the local quarry. Their three children are: Axl (Charlie McDermott), perpetually lazy and unmotivated, often to the point of wearing only his boxers; Sue (Eden Sher), the quirky but persistent and energetic middle child who tries out for a number of extracurricular activities...and fails spectacularly at almost every one; and Brick (Atticus Shaffer), the gifted but socially awkward youngest child, who reads a lot and has a tendency to whisper the last words he saidnote last words he said.

Along with Modern Family, it was the break-out comedy of the 2009 television season (though Modern Family tends to get all of the entertainment media attention). In 2017 it was announced the show's ninth season would be its last, with its final episode airing in May 2018.

from ABC was a Spin-Off centering on Sue. The pilot was passed over however.

Not to be confused with the 2000 sitcom Malcolm in the Middle (though some comparisons are inevitable).