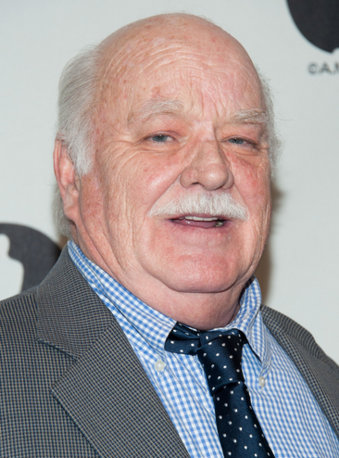 Brian Doyle-Murray (born October 31, 1945 in Chicago, Illinois) is an American comedian, screenwriter, actor and voice artist. An alumnus of the long-running American sketch show, Saturday Night Live, Doyle-Murray was a feature player during the show's fifth seasonnote 1979-1980 season, as one of many replacements for Dan Aykroyd and John Belushi, both of whom left after the 1978-1979 season, a writer for Jean Doumanian's critically abysmal sixth season (1980-1981), and was a feature player and Weekend Update anchor during Dick Ebersol's first full season as executive producer and show runner [season seven; the 1981-1982 season], making Doyle-Murray one of a handful of SNL cast members who appeared on the show under all three executive producers note Other cast members to hold this honor are: Denny Dillon (who cameoed on a 1970s Lorne Michaels episode, was a Jean Doumanian cast member, and appeared on the first episode with Dick Ebersol as the new executive producer), Eddie Murphy (who started out as a Jean Doumanian cast member, became popular — and hosted twice; once while a cast member and again after he left the show — in the Dick Ebersol era, and made appearances and came back to host on the Lorne Michaels episodes), Yvonne Hudson (who made an uncredited appearance on a season 5 Lorne Michaels era, was a feature player during Jean Doumanian's era, and made some sporadic appearances as an extra during Dick Ebersol's era), and Brian's brother, Bill Murray (who was a cast member for Lorne Michaels and hosted a Jean Doumanian-era episode and a Dick Ebersol episode).

Some of Doyle-Murray's celebrity impressions (most of which he did when he returned as a feature player during the show's seventh season) include Colonel Tom Parker (Elvis Presley's manager), televangelist Jerry Falwell, punk rocker Sid Vicious, Albert Einstein, and Twilight Zone host and show runner Rod Serling. Doyle-Murray didn't have any recurring characters, but he was a Weekend Update anchor (paired with either Christine Ebersolenote no relation to Dick Ebersol or Mary Gross). Unlike his brother, Bill, his time as a Weekend Update anchor wasn't that memorable (mostly because Weekend Update on SNL stopped being funny and/or worth-watching when Charles Rocket was hired and wouldn't reach its former glory again until Dennis Miller came along in 1985note though Brad Hall's time on Weekend Update has been Vindicated by History, thanks to cable reruns, streaming, and online video).

He is the older brother of actor/comedian Bill Murray and has acted with him in several films, including Caddyshack, Scrooged, Ghostbusters II and Groundhog Day. The reason Brian added "Doyle" (their grandmother's maiden name) to his surname is because there was another actor named "Brian Murray". He's also the older brother of John Murray, who was the lead on Moving Violations, and Joel Murray (One Crazy Summer, Still Standing).

Murray is known for his gravelly voice and has voiced The Flying Dutchman on Spongebob Squarepants, a small role as the Grandfather on Lloyd in Space, Coach Gills on Cartoon Network's My Gym Partner's a Monkey, Captain K'nuckles on The Marvelous Misadventures of Flapjack and as Maggie's dad on The Buzz on Maggie. He has also appeared as "Salty" in the Family Guy episode "A Fish out of Water". He is the voice of Jack the barber on King of the Hill. He also voiced the mayor in Ghostbusters: The Video Game and the Grandfather in The Goode Family. He was also the Cool Old Guy Jacob in Motorcity.