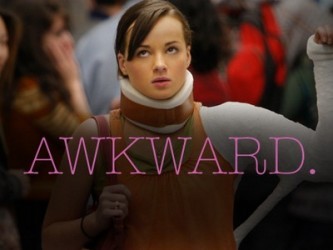 Awkward. is a live-action MTV dramedy about the life of Jenna Hamilton (Ashley Rickards), a social outcast who gains attention after a misconstrued suicide attempt.

Jenna is a normal, everyday Cool Loser. She has Amazingly Embarrassing Parents, who, due to having her in high school, never quite grew up themselves. She has a crush on popular jock Matty McKibbon, hangs out with her two best friends, Tamara Kaplan and Ming Huang, and tries to avoid the wrath of Sadie Saxton.

Jenna's life changes on the last day of summer camp when she loses her virginity to Matty and then receives an anonymous letter that calls her out on her faults. After her reaction to the back-to-back humiliation is mistaken for a suicide attempt, she now faces sudden attention and infamy, but she decides to take the situation in her own hands and attempts to rework it for the positive. Throughout the first season, she navigates trying to figure out who wrote the anonymous letter and being in a secret relationship with Matty while his best friend Jake Rosati develops a crush on her despite dating Sadie's friend Lissa.

The series premiered July 19, 2011. Despite initially appearing steeped in teen drama cliches, it quickly became a Sleeper Hit, developing a surprising Periphery Demographic and gaining critical praise. The fifth and final season aired in the fall of 2015.