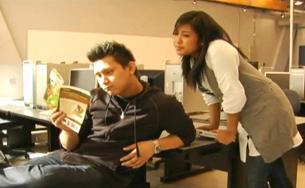 "That's my favourite part, you know."

Sunflowers always look to the sky.

Awkward, known also as The Awkward Compilation, is a self-proclaimed "love letter to pop culture" — a video series about the trials and tribulations of an awkward group of Asian-Canadian university students trying to find their own happy endings and getting in each others' way in the process. Geeky humour, occasional randomness, and the odd spontaneous musical number ensue. Prepare to laugh until you pee a little.

Lester and Alex are housemates and friends. One day Lester walks in on Alex making time with his hand and a video of Lester on the toilet, and it becomes apparent that Alex's feelings for him are a little more than "friendly". In fact, a little more like "stalkerish and obsessive". This makes things rough for everyone involved when Lester meets Steph...

Meanwhile their friend Kevin has a problem. See, Kevin likes this girl in his class, but he's not really sure how to let her know. After all, they've only met online. Moreover, she already has a romantic interest, and he's a bit of a douchebag. Luck is not on his side, but he's not one to quit without trying.

Written, directed by, and starring Lester Calleja and Alex Chung. Also featuring a bunch of people they know, pretty much playing themselves. Takes place predominantly in and around Lester's house and York University campus.

It spans six main segments and two interludes (three if you count the post-series retrospective). The Heroic Melon Collective website provides links to each installation

. Go forth and binge.

Not to be confused with the MTV series Awkward.