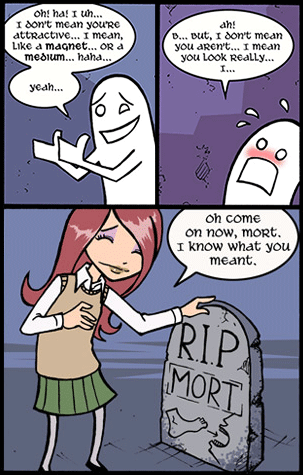 "If you ever find yourself in a hole, the first thing to do is stop diggin'."
— John Marston, Red Dead Redemption
Advertisement:

In a Sitcom, often a character will say something that's just meant to be a friendly little remark, and it will come out wrong, possibly sounding creepy, crazy, or offensive; they'll try and clarify it (whether they really need to or not), but just make things worse, and dig themselves deeper and deeper into the creepy/crazy/offensive pit. Exceptionally deep and/or frequent excavations are commonplace in Cringe Comedies.

May eventually lead to Shutting Up Now.

Compare That Came Out Wrong, Freudian Slippery Slope, Did I Just Say That Out Loud?, Open Mouth, Insert Foot, Verbal Backpedaling. The comedic verbal version of From Bad to Worse.

Contrast Change the Uncomfortable Subject and Not Helping Your Case (although it can overlap with Digging Yourself Deeper).

Subjecting a character to this too often may eventually lead to a (usually) comedic version of Then Let Me Be Evil.

Not to be confused with Dug in Deeper (where someone pursues something because they're told they're great at it, even though they're not), Dug Too Deep (which is about physical digging), or Digging to China (same). Nor Dig Your Own Grave, for that matter.