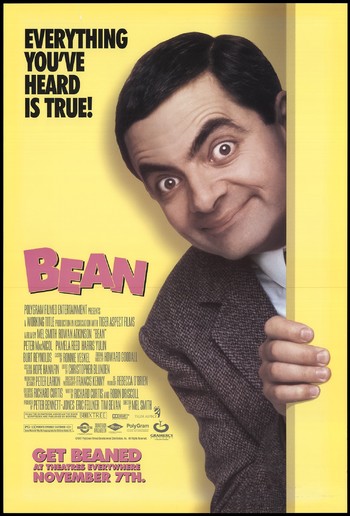 The ultimate disaster movie
"The British gave him an air ticket. Their government gave him a passport. The USA gave him a visa of entry. Now, there's no stopping him. He's on his way... to America."
— Teaser narrator

Mr. Bean (Rowan Atkinson) is a rather incompetent security guard at Britain's Royal National Gallery. Desperate to get rid of him but unable to fire him, thanks to a good word from the chairman, the gallery's board sends Bean to a gallery in Los Angeles to deliver and officiate the return of the painting Whistler's Mother to the United States. Believing him to be a fine arts scholar, the LA gallery pairs Bean up with their mousy curator David Langley (Peter MacNicol) to accommodate him and ensure that nothing happens to the painting, all while Langley tries to keep his familial troubles at home under control. Naturally, everything goes wrong.

Bean would later get another movie in 2007, Mr. Bean's Holiday, which was a stand-alone sequel with little relation to this film aside from the presence of the title character and served to be truer in tone to the original series.