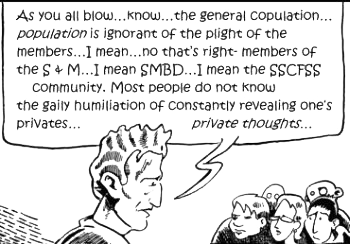 Nobody ever wants to be the keynote speaker at the annual convention of the Society for Sufferers of Chronic Freudian Slip Syndrome. I wonder why?
"Good evening. I'd like to talk to you tonight about the place of the nude in my bed. Um — in the history of my bed — of art, of art, I'm sorry. The place of the nude in the history of tart — call-girl — I'm sorry, I'll start again. (Beat) Bum — oh, what a giveaway!"
— An Art Critic, as played by Michael Palin, Monty Python's Flying Circus — "Full-Frontal Nudity"
Advertisement:

Sometimes a character in a book or show — or even the author of the work — has a lot on their mind. And try their best, they just can't stop blurting it out in a Freudian Slip, at all. And of course, That Came Out Wrong and any attempt to stop the flow just results in more vulgarities. If they're trying to impress someone, they're just plain out of luck. Of course, those with a Hair-Trigger Temper will always interpret the error as intentional. If you're discussing matters with a stranger, you'll be mistaken for a pervert.

Similar to Digging Yourself Deeper and Ignore the Disability, which it tends to be used in conjunction with. However, in Ignore the Disability, the humor comes from an uptight member of society inadvertently mentioning an embarrassing or nude peculiarity they had taken pains to avoid, and in Digging Yourself Deeper it comes from the words used being poorly-chosen, rather than slipping out of the subconscious.

Compare Accidental Innuendo, when a person has control over what they say but doesn't realize any Double Entendres that they just spouted.