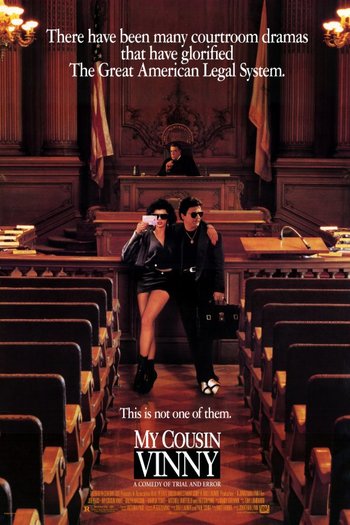 Vinny: I'm learning all this as I go along. I'm bound to fuck up a little.
Lisa: "A little?" You've been thrown in jail twice!
Advertisement:

Two college kids from New York, Bill Gambini (Macchio) and Stan Rothenstein (Whitfield), are driving through Alabama when they are arrested for the armed robbery of a convenience store and the shooting of its clerk — due to a misunderstanding for why they were being questioned, Bill accidentally "confesses" to the crime and the two are put on trial for first-degree murder and accessory. Fortunately Bill has an attorney in the family, his cousin Vinny, and Vinny soon comes down to Alabama with his argumentative fiancée Mona Lisa Vito to help the boys clear their names. Hilarity Ensues.

The film is famous for being extremely accurate on the legal side. Jonathan Lynn studied college law and wanted the film to be realistic in its depiction of proceedings. Lawyers and judges have widely praised the film not just for doing a good job showing what the trial process is actually like, but also its attention to smaller details that aren't focused on, such as how Vinny effectively uses cross-examination to discredit eyewitnesses and demonstrate they aren't reliable as solid evidence. Law professors have been known to show the film to their classes to discuss and dissect the film and demonstrate what to do and what not to do in a trial. When the film is often mentioned alongside To Kill a Mockingbird as one of the best legal films, you know it's doing something right. Tomei won the 1993 Academy Award for Best Supporting Actress for her role in the film.

The film is also notable for not leaning on Deep South stereotypes — the residents of the small Alabama town are shown to be a bit simple but are definitely not stupid, and are overall decent and sensible folk. And unlike most legal films and television shows, the prosecutor and the judge are not portrayed as antagonists; the prosecutor is a reasonable professional who sincerely believes he is bringing two murderers to justice and has no animosity with Vinny nor Vinny with him, and while the judge dislikes Vinny it's not without merit and he doesn't let his opinion of Vinny influence his moderation of the trial proceedings (with one single exception). The humor is derived from its Fish out of Water premise with the proud New Yorker Vinny having to adjust to temporarily living in a southern town, since of course New York and Alabama are two very different places with very different people and culture. It's also soon revealed that while he is a lawyer, it took him six tries to clear the bar exam and this is his first actual trial case, and there's a lot of pressure on him since his cousin's life is on the line.

In 2017, crime novelist Richard Kelter began a novel sequel series titled Back to Brooklyn. Vinny deals with his and Lisa's family, and his friend Judge Malloy suggests he get experience by becoming an assigned counsel (the attorney you are assigned for free if you can't afford one). The next three books in the series are My Cousin Vinny (2018), Wing and a Prayer: How They Met (2019), and A Very Vinny Christmas Story (2020).

There have been many trope example lists that have glorified the Great American Legal System.

This is not one of them:

Gibbons cannot get through his opening statement without stuttering.

Gibbons cannot get through his opening statement without stuttering.