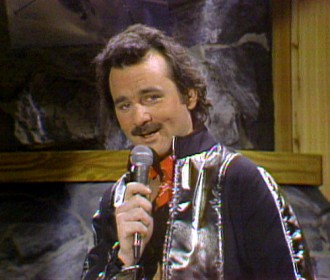 Thank God you don't have to hear him.
Ryan Stiles: Thank God you're here, Captain Lounge Act.
Colin Mochrie: [puts on smarmy face] Have you ever felt it as hot as this? It's amazing, isn't it? And where are you from?
Greg Proops: There's no time for that! The temperature's getting too hot! Can't you see?
Colin Mochrie: [singing horribly off key] It's too hot!
— Whose Line Is It Anyway?, Superheroes
Advertisement:

For decades, clubs and hotel and airport lounges have hired singers for entertainment. In the 1960s and 1970s, a lot of them incorporated the jazzy style of singers like those in the Rat Pack.

Now, according to Sturgeon's Law, some were better at this than others.

In the world of fiction, not only does that 90% rule apply, but it seems that lounges give this job almost exclusively to people (sometimes Casanova Wannabes) who are not only insufferably smarmy, but their fashion sense (like an all-polyester leisure suit or Tacky Tuxedo) seems to have a bet with their singing and facial hair to see which can be more godawful.

Some standards for this character include The Love Boat theme.

Yet this seems to be mostly that way in comedy, where it's meant to be a caricature. A club singer who simply appears in the background will likely be much better than you'd expect in real life.

Note that this has very little to do with the original twentieth-century meaning of "lounge lizard" in British English (a sleazy, would-be "sophisticated" seducer, with implications of social-climbing), though the two can overlap.